The Holy Spirit: The Profane Reality of the Trinity

We have dealt with two of the persons of the Trinity in other essays. In order to complete the triune essence of God, we will now focus our attention on the Holy Spirit. Among the three, its identity is the most evanescent. 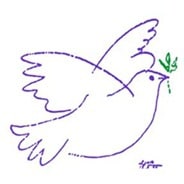 The Spirit is the most enduring epithet of God. We can find it from the first verses of Genesis to the last pages of the Book of revelation.

In the Old Testament, the Spirit is portrayed as the vitalizing force behind God’s activity. The word ruah, spirit in Hebrew, also means wind.1

The words spirit and breath are also linked in a special fashion to the creation of the world. As related in Genesis, God breathes his Spirit into man and gives him life.2 Breathing suggests the physical act of inhaling and exhaling the wind. It also depicts the inner and outer omnipresent reality of the Spirit of God in nature. As such, the life giving Spirit alludes to the unfathomable mystery of the origin of life.

The concept of a deity breathing life into man is not exclusive to Judaism and was prevalent in the ancient Near East. Similar Babylonian and Egyptian mythologies associate the breathing activity with the origin and animation of all life.

In the Scriptures, the Spirit of God became the inspiration given to prophets called to speak the word of God.4 In this sense, the presence of the Spirit is akin to the unfathomable ways in which the wind, of which the prophet is filled, blows in the desert. Similarly, speaking gives the un-vocalized Hebrew alphabet meaning and sense.

Ezek. 1:28 Such was the appearance of the likeness of the glory of the Lord. And when I saw it, I fell upon my face, and I heard the voice of one speaking. And he said to me “Son of man, stand upon your feet, and I will speak with you.” And when he spoke to me, the Spirit entered into me and set me upon my feet; and I heard him speaking to me.

The Spirit infuses the gift of understanding and communication. Without this gift, the prophet would not be able to understand the word or message of God: in the Spirit of the Word lies the essence of all meaning.

Similarly, Mary is filled with the presence of the  Spirit and understands the full extent of the message of God in regards to the virginal conception of her son Jesus Christ.

In Isaiah, the Spirit of God is linked in a special way with the covenant. The original expectations of the Spirit of God were mainly centered on the physical strength and power of Israel, especially in the heroic exploits of war. These hopes were successively transformed into a more messianic message of salvation.

Jesus’ birth, baptism, and resurrection all share the presence of the Holy Spirit. All three are symbols of conception and re-birth. At the baptism, the Father and the Holy Spirit are present revealing the Trinity at work. They all bear witness to the power of God’s self communication as the Word becomes flesh in Jesus Christ. The Incarnation is the proof of the ongoing relationship between the Father, the Son, and the Holy Spirit.

At the baptism, the Holy Spirit is described in all four Gospels as a dove descending from heaven.6 The symbol of the dove is a privileged metaphor that describes the essence and identity of the Holy Spirit. It is a symbol rich in significance even in the Old Testament.

The doves referred to in the Scriptures are of two species: the turtledove and the young pigeon. The Hebrew word yona is a general designation for various species of doves that lived in the Middle-East.

In the Old Testament, the dove is mentioned in the flood as bringing back a “freshly plucked olive leaf” to confirm that the land is now safe and fertile again.7

A popular character of the Old Testament also bears the name Yona; i.e., Jonas. The word literally means, moaner. This is the same Jonas who was swallowed up by the whale and spit out three days later: an allegory that parallels the inside of the whale to the womb in which the hero undergoes the mythical journey of death and rebirth.

The dove is also paralleled to the sacrificial offerings. In Leviticus, the law prescribes the offering of two turtledoves or two young pigeons for a woman’s purification after childbirth.8 One bird is set aside as a burnt offering and the other for sin offering. These doves are prescribed as substitutes when the woman cannot afford the sacrifice of the more expensive lamb, further correlating the dove with the poor.

Isa. 38:14 Like a swallow or a crane I clamor,
I moan like a dove.
My eyes are weary with looking upward.
O Lord, I am oppressed; be thou my security! 9

In the symbolic representations of Old Europe, the dove was associated with the Goddess.10 In ancient Near East, the bird was usually identified with the chief female goddess of fertility. In the temple of Ishtar, the dove was connected to the goddess, and the prostitutes who participated in the cults were called the doves of the temple. The dove was also known to represent the goddess Aphrodite.11 We know from the writings of Homer that Athena and Hera also assumed the guise of the dove.

Because of the widespread influence of Hellenism in Palestine in Jesus’ times, the four Evangelists must have been aware that the dove was the symbol of the goddess Aphrodite. The New Testament was written in koine, a Greek language. It was commonly spoken throughout Palestine during the time the Evangelists wrote the Gospels. In light of this, might it be possible that their representation of the dove as a metaphor for the Holy Spirit was meant to suggest a connection to the goddess principle?

The Holy Spirit’s presence at Mary’s conception of Christ inaugurates his own sacred identity.

Later, Jesus is depicted as being full of the Holy Spirit. He is led by the Spirit to the desert to fast for forty days, at the end of which period he is tempted by the devil. A parallel is made to the people of Israel’s own journey in the wilderness. When he returns to Galilee, he comes back with the power of the Spirit.

At the end of his public life, Christ tells his disciples that he will send another “Counselor” as soon as he leaves this world. The narratives use the word paraclete which is taken from the Greek parakletos meaning helper, intercessor, and advocate. This term commonly refers to the Holy Spirit. This Counselor is present at all times, ready to teach and guide into all truth. He is described as another entity with a mode of being all of his own, distinct from the Father’s and the Son’s. And although he has a life of his own, he shares the same divine substance as God.

Mt. 28:19 Go therefore make disciples of all nations, baptizing them in the name of the Father and of the Son and the Holy Spirit.

Baptism is the most celebrated symbol of spiritual re-birth. In the quote above, Jesus’ last words give his apostles the authority to baptize in the name of the three persons of the Trinity. He also breaths on them the Holy Spirit. The same gift of life given to Adam by God at the beginning.

The synoptic accounts end  with Jesus’ crucifixion and resurrection. More evidence of the life of the Spirit is found in the Acts of the Apostles to fulfill the promise Jesus had made to his followers.

At the Pentecost, the additional sign of the presence and identity of the Holy Spirit manifests itself as all the disciples are gathered in an upper room where Mary the mother of Jesus is also present. Luke takes special care to mention that a group of women who followed Jesus throughout his public life, and who remained in the shadow of the male disciples, are there as well. Suddenly, a mighty wind fills the room and tongues of fire appear on every single one of them. Everybody is swiftly filled by the power of the Holy Spirit. They soon realize that they can speak in other tongues. The Paraclete vented to them the gift of communication. But most important of all, the Holy Spirit provided them with the power of Christ’s authority.

Acts. 4:13 Now when they saw the boldness of Peter and John, and perceived that they were uneducated, common men, they wondered; and they recognized that they had been with Jesus.

It is through the Holy Spirit that the disciples spread the Word to small groups of ecclesiae who began to diffuse throughout Palestine and Rome.13 These early Christians, who were for the most part Jews, believed in the impending return of Christ and the imminent fall of the empire. Neither materialized.

Their faith remained steadfast despite the Roman persecution. They were unaware that unforeseeable events would soon favor their faith to expand throughout the Roman empire.

One of these events was the sudden conversion of Constantine, in 312 AD. Constantine reportedly witnessed the sight of a luminous cross in the sky. The vision had a message attached to it which read: In hoc signo vinces; e.g., With this sign you will win. He ordered that the symbol of the cross be put on all of his soldiers’ shields. The battles he fought and won afterwards strengthened his belief on the benefit of this emblem symbolizing the new faith. As soon as he became Emperor, he made Christianity the official religion of Rome.

As the Church flourished, it spread to the limits of the Roman empire and beyond. Church officials soon gathered in councils to resolve matters of faith and doctrine in order to dispel a number of heresies that were emerging among the believers. During the councils of Nicaea (325 CE) and Constantinople (382 CE), the creed of the Holy Spirit was promulgated. At these councils, the Holy Spirit was defined as the Lord, the giver of life.