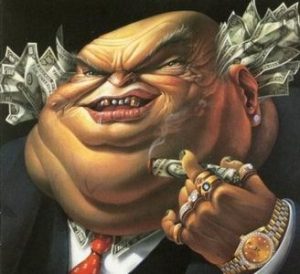 The current meaning of inflation is a shift from the original sense of the word that meant being puffed up with air or gas; filled with vanity, pride; or being filled with false notions. The original significance was introduced in early 17th century. While the current economic use took hold in late nineteen century during the Industrial Revolution during the era of the Robber Barons.

The issue here is not about the majority of billionaires, or about the nature of wealth or money, but about individuals who are afflicted with a god complex. Whereby the excessive amount of money is alienating these billionaires from an unpredictable reality they are attempting to control. Money in itself is not detrimental. It only becomes so when it feeds a delusion of misplaced power that disrupts an unfathomable dynamic of reality. On the flip side, money is beneficial to defend one’s individual sovereignty against the tyranny of greedy people.

The evil effects of greed is showcased by delusion that stems from the distortion of God’s unfathomable reality embodied by the divine sovereignty of every individual human being, regardless of wealth or status; a delusion that is oblivious the spiritual dynamic of the sacredness of life embodied by the people.

The paradox is that greedy billionaires are disposable fools used to fulfill God’s ultimate design. Similar to the Robber barons who left to posterity the rail road system yet as individuals are cast in the eternal annals of history as scoundrels.