When Michael Moore’s publisher wanted him to re-write nearly 50% of his book entitled Stupid White Men or they would not publish the book, the author balked. This was only a few days after 9/11 and the nation was still reeling from the chock the attack. On September 26th, presidential spokesman Ari Fleisher made this comment on national TV (later retracted) that “all Americans…need to watch what they say, watch what they do.”

The warning had some cooling effect on the author. Fearing that the publisher would not publish his book Moore kept quiet and stayed away from the media for two months so not to upset News Corp (Harper Collins’ parent company).

On December 1st the author gave a speech to a private event hosted by a New Jersey Citizen’s Action knowing there would be no media present. He also discussed with a crowd of 100 people in attendance his struggle with his publisher about Stupid White Men. He read passages of his book concerned that:

“It may be the only time it’s ever heard by anybody,”…”As far as I knew, there wasn’t any press there, so I told people what had happened. They asked, ‘What do you want us to do?’ I said, ‘Don’t call the publisher, don’t call the press. Let me deal with it.'” 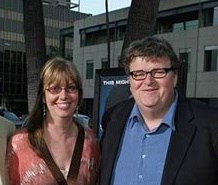 Among the attendees was Ann Sparanese, a librarian at Englewood Library in New Jersey and a board member of the American Library Association (ALA). Ignoring Moore’s request, she posted a message on several ALA list-servers as soon as she returned to work the following Monday, detailing Moore’s problems with his publisher.

Sparanese explained: “I thought these particular librarians would be especially concerned. This is NOT a question of the CIA or the government demanding that a publisher stop publication for national security or some other well-known reason. The publisher just decided to walk away from the money  −the book’s ALREADY printed and sitting in a warehouse−  because of the current war-inspired, anti-dissent atmosphere. Even satire is biting the dust, by the publisher’s own hand.”

A few days after the ALA event, publishing insiders pick up the story. On December 4th Steven Zeitchik of the publishing trade magazine Publisher’s Weekly published an article relating Moore’s struggle with HarperCollins. The next day New York Post followed up on the story. On December 14th, Sparanese’s message was quoted extensively in “Holt Uncensored”, an e-mail newsletter published by Pat Holt.

Within days one of the list servers’ posting and the Publishers Weekly article, a HarperCollins editor informed Moore they were receiving a lot of email from angry librarians about Stupid White Men. As it happens libraries represent big money to publishers, spending over $2 billion a year for books and electronic information.

Moore did not know Sparanese had attended the Citizen’s Action event. Yet he’s thankful to her. He partly attributes the publisher’s change of heart to the lone librarian’s posting on the Net her concerns about free speech. “Librarians see themselves as the guardians of the First Amendment…You got a thousand Mother Joneses at the barricades! I love the librarians, and I am grateful for them!”

A sole unknown lost in a crowd who decides to take whatever action she could against what appeared to be corporate intimidation and censure. The simple posting on the internet by a quiet librarian perhaps helped to save Moore’s book. Pushing the author  to greater things with his Fahrenheit 9/11. As far as we are concerned Sparanese’s activism is a perfect example of what we refer here as interactivism.