The years that followed the advent of the Internet brought a renewed interest in Teilhard de Chardins’ work. It stemmed from his vision of the “noosphere“, or the “mind layer” hovering the earth that he first described in 1922. When his work was first published, he was mostly regarded as a visionary but esoteric writer. His books were mostly read by the intellectual elite of the time, he had nevertheless become a popular icon. The advent of the Internet somehow confirms his vision of the outcome of a global “planetisation”.

The way and speed in which the Net has swept the planet has caught everybody by surprise. Today, the Net is taken for granted and an essential part of our lives. Yet, we don’t fully understand the repercussions on our culture and way of living. 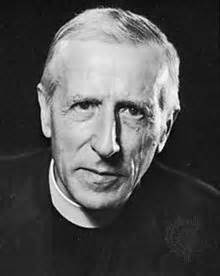 In light of the author’s vision, and the advent of the Internet, we should be living at a “convergence“, or a rebound in terms of human energy, leading us a step closer toward the point Omega. As a consequence, the Net has made Teilhard’s thinking more relevant today then at any other time in the past. Yet, further studies and discussion are needed to fully understand his writings. They are necessary to dispel any misconceptions about his thinking. We will begin with some introductory notes, and more importantly, we will dwell on some fundamental concepts that are essential to fully understand his “scientific memoir” entitled “The Phenomenon of Man”.

Pierre Teilhard de Chardin was born on May 1st 1881 in the small town of Sarcenat in the Auvergne, a region of France mostly known for its city of Vichy. At the early age of ten he entered a Jesuit boarding school where he devoted himself to the fields of geology and mineralogy. He was so impressed by the intellectual discipline of his teachers that he decided to join the Jesuit order at eighteen. The next thirteen years would be spent between studying philosophy in Jersey, teaching in Cairo, studying theology in Sussex, all the while pursuing a deeper competence in geology and paleontology.

1912 turned out to be a landmark year for the young student. He was ordained priest and he read Henri Bergson’s (1859-1941) Evolution Creatrice. The book would be a critical influence on Teilhard’s thinking as it set his lifelong interest on the subject of evolution. It explains human existence in terms of a creative evolution. Bergson describes the mind as pure energy, a “vital force” or élan vital, which is responsible for all organic evolution. The author emphasized the importance of intuition over intellect and held to the idea of two opposing currents of inert matter in conflict with organic life as the “vital force” that strives toward free creative action. For his literary and intellectual work Bergson was awarded the Nobel Prize in literature in 1927.

After spending several years abroad studying and teaching Teilhard returned to Paris to pursue his geological studies and started working for Marcellin Boule, the leading French pre-historian and archeologist at the Institute of Human Paleontology at the Museum of Natural History. It is there that he met his lifelong friend and colleague Abbe Breuil who shared his interest in evolution.

World War I put a halt to his studies. As a priest he took part as stretcher-bearer and received the Military Medal and the Legion of Honor. The misery of war further strengthened his religious convictions and confirmed his vocation. It also reinforced his professional goals and soon after the war he embarked on a geological career with special emphasis on paleontology.

After the war he was designated Professor of Geology at the Catholic Institute of Paris and in 1922 he took his Doctorate at the Sorbonne. In 1923 he left for Mongolia on a paleontology mission for one year on behalf of the Museum of Natural History. Although his lectures were popular among the students, when he returned to the Institute he found out that he was forbidden to teach. Some of his ideas on original sin and evolution were considered unorthodox by his religious superiors. In 1926 he returned to China as an adviser to the Geological Survey of China and undertook many expeditions, one of which unearthed the skull of the Peking man (Sinanthropus pekinensis).

The outbreak of World War II prevented him from returning to Paris to undertake an appointment as the Director of the Laboratory of Advanced Studies in Geology and Paleontology. The next six years of isolation spent in China were to become critical in developing and maturing his “dangerous thoughts” that were to be expounded in Le Phénomène Humain. Upon his return to France in 1946 he immersed himself completely in intellectual research and in 1947 suffered a serious heart attack.

After he recovered he went back to Paris to find out that he was forbidden to write about any philosophical subjects. A further setback came in 1948 when he was forbidden to put forth his candidacy as Professor at the College de France, the highest position he could aspire. But his biggest blow came in 1950 when the Church denied him the permission to publish Le Groupe Zoologique Humain (a different version of Le Phénomène Humain).

His presence in France had become increasingly difficult for him and in 1951 he finally accepted an invitation that was made to him a few years earlier by the Viking Foundation (later called the Wenner-Gren Foundation) and moved to New York. The Foundation sponsored two of his trips to South Africa to study first hand the discovery of Australopithecus. He also participated in the important work on paleontology and archeology on the hominid evolution. He spent the last four years of his life at a quiet and secure shelter of the foundation. He died on Easter Day April 10th 1955 in New York city.

The Priest and the Scientist

The Church never gave him the permission to publish any of his books during his lifetime as they were considered to be too controversial. Teilhard was chagrined by the refusal but accepted the decision stoically. Being a Jesuit, he had made an additional vow of obedience to the Pope in addition to the priestly vows of poverty, chastity and obedience. The main reasons for the Church’s refusal was the fear that his work would be misunderstood. The Church’s reluctance appeared to be justified when in 1952 a reprint from l’ Agence française de presse was published in a San Francisco newspaper that stated that “The God of Père Teilhard is a God immanent to the evolution of the world”. Teilhard protested vigorously at this faulty reductionism of his work that ignored the core idea of transcendence that is so essential to his thinking.

His works were finally published shortly after his death since the permission to publish only applies to living writers. In 1955, 500 copies of Le Phénomène Humain was published. Most of the book was written between 1938-40 and it was finally revised and completed in 1947-48. The English version was published in 1959 with a valuable introduction by his friend and peer Julian Huxley.

The book was translated in English into “The Phenomenon of Man”. One doesn’t have to be fluent in French to note the major distinction between the original title and the translation. We have no way of knowing what Teilhard would have thought of juxtaposing “human” with “man”. The author was well known for his sensitivity and it seems reasonable to think that he must have waded the distinction between the terms and would have opted, as he did in French, for the term “human” to appear in the title.

In his “warning” at the beginning of Le Phénomène Humain Teilhard states the scopes and limits of his book. As he explains, his “scientific memoir” is not about theology nor metaphysics, but should be seen as an “introduction” to the human phenomenon, the phenomenon of which “man” is at its center but with a particular concern about the “Whole” phenomenon that transcends “man”. The term “man” should be understood here as the process of being human. To describe the “Whole” Teilhard warns that he has undertaken two fundamental options. The first, is the primary importance given to the soul and thought to the fabric of the Universe. The second, is the biological value attributed to the Social Reality around us. The preeminent significance being the interrelation of the spiritual effect of the Human Being in Nature and the biological effect of organic nature in Humanity.

Teilhard was a priest and a scientist. More precisely a Jesuit and a paleontologist in addition to being a geologist. Two outlooks that permeate his book. As it happens one can clearly see the scientist outlining the course evolution in his writing. On the other hand, it is the priest that speaks about Christ being the beginning, the center and the final goal of all things. For him the key to evolution is the presence and action of God on the world, more precisely the presence and action of Christ. As he wrote to a friend in 1936, “my chief interest in life has been to bring about in some way a plainer disclosing of God in the world.” And it is the intellectual, i.e. the Jesuit, that tries to reconcile science and religion with concepts of “hominisation”, “cosmogenesis”, “planetisation”, “noogenesis” and “point Omega”.

Teilhard was a true Jesuit. The order founded by Saint Ignace of Loyola, a former soldier who after being wounded in battle became a priest and founded the order known as the Society of Jesus (S.J.) to help the Church contain the spread of the Reformation with its own Counter-Reformation. As stated earlier, the order has an additional vow of obedience to the Pope. The society is also known as the Soldiers of Christ, and is widely regarded as the Church’s intellectual elite, a claim readily disputed by the Dominicans.

It is the Soldier of Christ that speaks in his writings. The Catholic foot soldier who is trying to reconcile his love of Christ and his love of science. This point is tantamount and must be kept in mind to clearly understand Teilhard. One of the biggest error in interpreting his thought is to give more importance to the scientist than to the priest. Consequently it is the Christian, more precisely the Catholic, a “hyper-Catholic” as he liked to call himself, that speaks in his books. As such Christ is the “Alfa”, the center and the “Omega” of the whole human phenomenon, which he describes as “Le Milieu Divin”. The latter is the title of a book that was translated into “The Divine Milieu”. Again the English translation does not convey the essence of the original title. In French the word “milieu” means center, but it also means environment in which Christ is the center and the whole.

As we have mentioned Teilhard was a true Catholic. The word comes from the Greek katholicos (kata, by + holos, whole) which means “universal” and must be understood in that sense. The term must not be confused with the oxymoron of Roman Catholic that is mostly used in the U.S. Furthermore, Teilhard called himself a “hyper-Catholic” in the sense that he was a true believer in the Universality of the Church. Here again, the Church must be viewed not as the visible and physical body of the Church of Rome, but the invisible and living assembly of faithful who believe in the Universal principles embodied by Jesus-Christ. Although the Church of Rome is the guardian of tradition and doctrine and the administrative agency in charge of the visible body of the hierarchy, the Church of which Teilhard is concerned, is the mystical body of Christ; the Living Church.