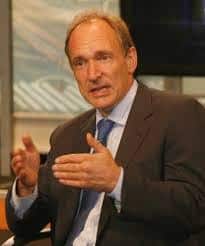 The inventor of the world wide web has warned that the freedom of the internet is under threat by governments and corporations interested in controlling the web.

Tim Berners-Lee, the British computer scientist who invented the web 25 years ago, called on Saturday for a bill of rights that would guarantee the independence of the internet and ensure users’ privacy.

“If a company can control your access to the internet, if they can control which websites they go to, then they have tremendous control over your life,” Berners-Lee said at the Web We Want festival on the future of the internet in London.

“If a government can block you going to, for example, the opposition’s political pages, then they can give you a blinkered view of reality to keep themselves in power.”

“Suddenly the power to abuse the open internet has become so tempting both for government and big companies.”

Berners-Lee, 59, is director of the World Wide Web Consortium, a body which develops guidelines for the development of the internet.

He called for an internet version of the Magna Carta, the 13th century English charter credited with guaranteeing basic rights and freedoms.

Concerns over privacy and freedom on the internet have increased in the wake of the revelation of mass government monitoring of online activity following leaks by former US intelligence contractor Edward Snowden.

A ruling by the European Union to allow individuals to ask search engines such as Google to remove links to information about them, called the “right to be forgotten”, has also raised concerns over the potential for censorship.

“There have been lots of times that it has been abused, so now the Magna Carta is about saying…I want a web where I’m not spied on, where there’s no censorship,” Berners-Lee said.

The scientist added that in order to be a “neutral medium”, the internet had to reflect all of humanity, including “some ghastly stuff”.

“Now some things are of course just illegal, child pornography, fraud, telling someone how to rob a bank, that’s illegal before the web and it’s illegal after the web,” Berners-Lee added.