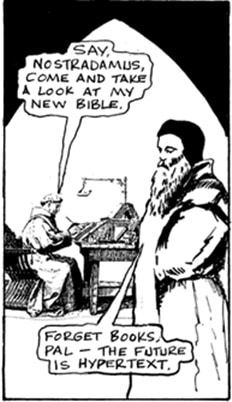 The term hypertext was introduced by Theodore H. Nelson in the 1960’s. He defined it as “non-sequential writing ─text that branches and allows choices to the reader, best read at an interactive screen. As popularly conceived, this is a series of text chunks connected by links which offer the reader different pathways” (Literary Machine).

A few years later Roland Barthes expanded Nelson’s definition and applied it to ideal textuality. He added to the definition of text as: a block of words or images that are linked electronically by multiple paths, in a non-linear and perpetually unfinished textuality, in terms of link, node, network, web, and path. Barthes explains:

“In this ideal text, the networks are many and interact, without any one of them being able to surpass the rest; this text is a galaxy of signifiers, not a structure of signifieds; it has no beginning; it is reversible; we gain access to it by several entrances, none of which can be authoritatively declared to be the main one; the codes it mobilizes extend as far as the eye can reach, they are indeterminable…”

Michel Foucault in The Archeology of Knowledge related how a book ─text─ must be conceived in terms of network and links. He explains that “borders of a book are never clear-cut” the text “is caught up in a system of references to other books, other texts, other sentences: it is a node within a…network of references”

Nelson, Barthes and Foucault, have introduced the idea that with hypertext we must abandon concepts like control-center, hierarchy, and linearity. Instead, we must now rely on ideas based on multi-linearity, nodes, links and networks.

The most striking implication of hypertext is the disintegration of authority and its underlying power. The author is no longer considered as the sole and original purveyor of ideas and truths. He is exposed as a link to an invisible web that relies on other sources and traditions that preceded him. Every author is linked to the past by a previous textuality. He is a contributor to the ongoing expansion of meaning and hypertext.

Scholars have established that the first five books of the Bible ─the Pentateuch or Torah─ are made up of patches of text written by several authors ─J, P, R─ that were weaved to form the Bible. These texts were put together by a single editor ─R. Furthermore, myths, codes of laws, and numerous stories of the Bible were taken from different cultures by the Jewish people who were living in exile prior to the compilation of the Torah.

Throughout the synoptic Gospels links are made to the Old Testament in order to show that Jesus-Christ fulfills the prophesies of the Bible and to prove he is the Messiah (Matt 2:5-7 cites Micah 5:2, Matthew 2:15 cites Hosea 11:1, Matthew 2:17-18 cites Jeremiah 31:15, etc… In retrospect, these texts also reveal a form of hypertext.

We have posted on our site an essay on Zuni mythology. We find the cosmic world of the Zuni to be a beautiful example of aboriginal mythology disclosing a cosmological web of links and networks. It reveals how a people, its language and its social interaction relate to each other to form a cohesive and dynamic interplay of symbols, links and locations. All reflecting an harmonious relation between the members of the Pueblo and their social and natural environment.

Interactive hypertext has expanded the scope of authorship. Previously the reader ─also referred as the self─ became one with the text ─ or the author─ in a linear and forward experience propelled by the story. Self, text and writer were morphed into a unifying entity pulled in one direction by the narrative. Whereas with hypertext, the linear pull of the plot has been replaced by a multitude of paths and links. It signifies a rupture with authority and a fundamental tendency toward unpredictability, discontinuity, and disorientation.

The multitudes of paths and links may entice a form of disorientation and a fragmentation of the self. This leaves the door open for the possibility of a “positive disintegration”. This type of disintegration is mostly experienced by poets and artists in their creative process. In order to create, the artist must beforehand destroy or break the mold of previously established forms of symbolic representation. He must expand his artistic being with newer techniques. He is required to reach out to an original array of sources and create new links to form an ever expansive art form.

The original sense of the word “text” comes from the Latin, meaning: that which is woven, web or texture. It is fascinating to see how the development of the World Wide Web represents a natural propensity of humans to form new links and networks consistently over time.