The inside of a gray office building located in downtown Vienna Austria is busy with 24/7 hacktivity. The “hacker space” called Metalab is filled with people constantly searching security gaps in servers of major corporations and governments and informing them about their vulnerability. The hackers are also involved making Wi-Fi accessible to communities to connect, develop, communicate and prosper. 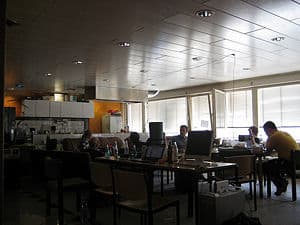 Metalab is non-profit org made up of a group of approximately 100 volunteers working day and night to promote open source software and defend freedom on the Internet. They are a new generation of hackers who continue good work originated by Net evangelists.

They are currently working on routing systems to by-pass a proposed French law called Adopi 2. The legislation is trying to set government surveillance of emails, chat rooms and instant messaging suspected of piracy and violation of “intellectual property”. The law is not clear and deceptive and allows authorities to spy on unsuspecting French citizens. Metalab interprets the law as a corporatist subversion of the government and the Internet. They suspect that government is working on behalf of corporatist interests to eventually control the Internet. Furthermore, the French government is seen as the front runner in such legislation and may set an example for other countries to follow.

Until 2000 hackers used to work alone or in groups found on university campuses. Since then, new tribal “hacker spaces” have flourished all over the world. It is estimated that there are 200 “hacker spaces” currently working and another 170 in working progress in more than 50 different countries. The founders of Metalab have also set up a web page Hackerspaces.org that has become a virtual Mecca for hackers