A Tower of Babel 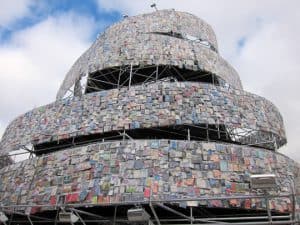 Tower of Babel, by Marta Minujín

The Book of Genesis relates the story of a time when the whole world shared a same language. With this common language the people of Babel attempted to build a towering system to reach heaven. The account reveals that by divine design, or a mysterious ingrained mechanism, no single earthly power gets away with building a totalitarian system: In biblical terms, of playing God. As soon as an earthly power does, there is a built-in mechanism that sets in motion a dynamic to destabilize any tyrannical endeavor. The story shows that the Lord’s intervention stopped the evil plan. It resulted in the creation of multiple languages and eventually division leading to growing confusion, protectionism and economic chaos in the world.

The definition of language does not limit itself to human speech, but to any signs or codes used as means of communication between two or more entities. One example of a global language consists of codes making up the hypertext markup language (html, http, etc) that allows computers and other devices to communicate between each other in order to create the World Wide Web’s interfaces. These codes are subliminal, they are nonetheless a language. Unfortunately, the development of this omnipresent language has made it possible for earthly powers to play god to monitor the whole world and control the people of the planet.

The Web became the most pervasive communication interface in the world. Unfortunately the WWW has been hijacked by a few big technocratic bodies. However, its global popularity does not mean that other protocols like quantum Internet could not be developed and adopted by varied institutions and states in the future.

Computers today use a binary system of 0s and of 1s in order to function, whereas quantum Internet uses a new language using qubits (or quantum bits) to communicate. Unlike bits, qubits are either fussy 0s or fuzzy 1s, a combination of both states, or a “superposition of states”. The novel quantum leap will bypass the current World Wide Web and inaugurate a new world of communication.

Timing is everything. And necessity is the mother of invention.

What we need to do is reinvent the Net. We have to rethink the Net.
Tim Pritlove

PS: The image  above represents a work of art by Marta Minujín, appropriately entitled Tower of Babel. The structure stands seven stories high. It is located in Plaza San Martín, Buenos Aires, Argentina. The piece of art is made of a collection of 30,000 books written in different languages donated from 50 countries.