A few weeks ago I viewed the movie Wonder Woman. I had planned to write an essay on the film to add a female super-heroine to my list of male superheroes. I somehow gave up on the idea since. I decided to write this short piece to explain why instead. 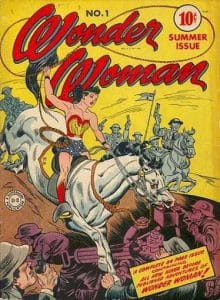 The movie is loosely based on the first issue of the comic book Wonder Woman published on July 22, 1942. Except for the British cast I was not impressed with the acting. The story is a bit convoluted. The setting moving from animated Greek mythology, to American comic book character and to the First World War, all conjured up in order to make the story work. I liked the short Greek mythology intro but disappointed by the idyllic fairy tale setting of an island populated by Amazons speaking with strange accents. A few minutes into movie I got the feeling that this was going to be another Hollywood blockbuster made to please a wide audience to make a box office sales record.

What prompted me to see the movie was its good reviews. And I was curious about the comic book’s creator who was a psychologist.

Charles Moulton created Wonder Woman during the Second World war in a period when American women worked in factories to build weapons while men were fighting abroad. These women were instrumental in winning the war and made the US the leading industrial power of the world.

William Moulton Marston picked the pen name of Charles Moulton for his comic book writing. He chose his mother’s family name making a matrilineal statement about his mother’s influence in his life. As a psychologist he became convinced that women had an ingrained loving nature in contrast to men’s more erratic disposition for violence. He saw the need to create a comic book character who would conquer the world with love rather than with fits and firepower. His wife Elizabeth Holloway Marston suggested he create a super-heroine to embody his idea of a loving character who would conquer the world by ending devastating wars.

Marston shared a lifelong relationship with his wife and former student Olive Byrne. Both embodied the feminism of the day. Throughout his career he recognized women’s latent abilities in the workplace and championed feminist causes. As a psychologist he realized that comic books had a great educational potential to reach a wide audience of young readers.

It took me a few weeks to figure out what bothered me about the movie. I finally realized it was a disconnect between what Wonder Woman does and what she says. Her actions throughout the movie are violent while she speaks about peace and love. One interpretation of the split personality relates to portraying an original character of a comic book in a movie format. These are two different entertainment mediums. Cinema is typically based on a screenplay that is adapted and produced by the movie industry into a media production. Whereas the comic book remains in its essence a narrative with drawings. Foremost, the comic book involves reading.

The non-stop visual violence and mesmerizing special effects obliterates the original message of love of the original comic book narrative. The disconnect between the visual violence and the narrative relies on the main purpose of the movie to make money underscoring the premise of Wonder Woman’s original comic book story: A mythical heroine who uses her female superpowers to induce confessions and communication in order to defend the world against violence and annihilation.