When I picked up a copy of The Coast News and read the front page article about a mosaic of a Madonna I couldn’t help being amazed how religious representations are consistently being recycled in contemporary art form. The article relates the story of a mural that had to be removed from its original place and moved to its current and more visible location on a wall of a restaurant in Encinitas, CA. 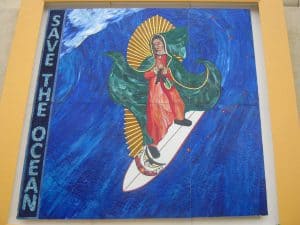 The mosaic echoes a primal yearning to resort to images like the one of the Madonna as a form of intercession in order to raise awareness on issues like the one affecting the world’s oceans.

Of course the Madonna has more spiritual resonance for members of the Catholic and Orthodox churches than for other Christian denominations. Nonetheless, the depiction of Mary surfing for a good cause may be viewed as artistically acceptable.

On the same topic but on a different spiritual level, I could not help thinking of another Madonna, the stage name of a pop artist turned media idol, whose secular claim to fame was launched with the video Like a Virgin.