The Net; then and now

It’s been almost 25 years since I began surfing the Net. At the time it was an exiting experience. Cyberspace was full of enthusiasts. The more involved activists were called net evangelists. Back then I surfed using my bulky Zenith laptop and a modem. It was not a plug and play environment like today. The interface consisted of a blue background screen using plain text commands. At the time I couldn’t help thinking that Teilhard de Chardin’s vision of the noosphere had come to fruition. Today, the Net’s appendage called the web is essentially a corporatized medium. Nonetheless, the unfathomable and subliminal mind layer that Teilhard de Chardin talked about is still vibrant and beyond corporate control, because its essence lies in an interactive communication dynamic. 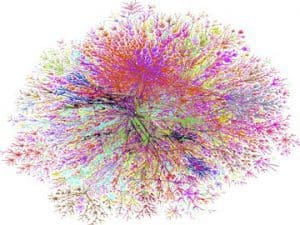 The term noosphere never became a popular idiom. Strange since we commonly use words like biosphere, atmosphere and stratosphere to describe biological life and different layers surrounding our planet. The expression mind-layer in my view is the closest way to illustrate the interactive communication buzzing around the earth. My favorite analogy is the human brain comprised of billion of synapses communicating between each other to make our human body work. Similarly, each human being is acting like a synapse interacting with other synapses around our planet, stimulating an unfathomable yet powerful brain activity hovering earth. This activity is undetected by each participant. It is beyond comprehension to us humans. However, this does not mean it doesn’t exist. I contend that scientific  research will prove the existence of a life force predicted by Teilhard de Chardin: A powerful life system beyond the control of any government or mega-corporation.

The vital organism I’m talking about is being alluded to by professor of electrical engineering Ali Hajimiri at the California Institute of Technology who in a recent interview stated that the Net “is ushering in a new stage of human social development”:

His argument shows to what extent there is a growing awareness that the noosphere is indeed buzzing around the earth.