The most popular movie at the turn of 2016 was Star Wars; The Force Awakens. As the title of the series implies, the topic of war is being projected in future outer space even though we’re still a long way from colonizing a planet. This shows how rivalry and war are part of man‘s genetic and narrative code. Keep in mind that Joseph Campbell was instrumental in Lucas’ development of his Star Wars saga. His contribution is noted in the theme of the Force that is part of the episode’s title.

On another perspective, the title may not only allude to outer space but to Hollywood’s star system and the conquest of alien market share. 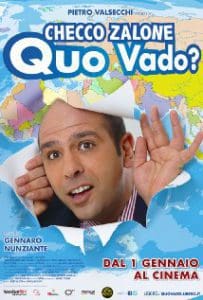 With this in mind, I couldn’t help noticing what may be a change in trend in Italy and perhaps elsewhere. During the Holidays the most popular movie in Italy was not Star Wars but a low budget movie entitled Quo Vado?

In three days the movie grossed more money at the box office than Star Wars did in three weeks. This is noteworthy because the movie is an Italian production. The people involved in the film seem to have escaped being swept away into the vortex of Hollywood’s black hole. Hopefully this movie will inspire and reinvigorate an Italian movie industry that has been moribund for the past four decades: Will Italy ever again produce directors like Fellini, Lina Wertmuller or the recently deceased Ettore Scola?

Quo Vado?; meaning where will I go or what other job will I be able to find, is a satire about a bureaucrat who his ready to do anything in order to cling to his government job. The subject touched a raw nerve in Italy where politicians and the bureaucracy have it better than a majority of working class Italians. This especially true of a great portion of the youth who can’t find a job. Whereas the private sectors, comprised of small family and mid size businesses, is burdened with too many taxes, regulations and struggling to survive in the global economy.

Bloated governments thrive elsewhere in the world. Examples of politicians, bureaucrats and the revolving door of government officials/private contractors who use tax payer’s money for an ever growing financial, security and surveillance state is a point in case. Instead of creating a more secure environment for the economy these systems create novel forms of protectionism. Unfortunately protectionism always results in a decrease in the velocity of money and a decline in the global economy. This decline will eventually be the best remedy to cure the overgrowth of a government/dark state.