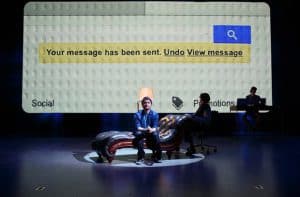 It is through artistic creation that obvious yet overshadowed truths come to light. In James Graham’s play Privacy, the author entertains the idea that in a post-Snowden world it is not privacy but retrospection and self-communication that should be the topic of concern. In that respect, psychoanalysis, reflection, meditation or prayer are an essential component of human spirituality. Only by segregating ourselves or by being left out, do we perceive ourselves as individuals rather than pawns of a sharing economy that benefits subliminal, powerful and omnipresent corporations. In this respect, a healthy balance needs to be reinstated between a wholesome self, as individuals and integrated human beings, and the outside/on-line world of the State and subliminal moneyed corporations.

Ed Snowden made a decision to stand up and confront a system that he perceived to be misguided. He knew that his actions as an individual would result in being chastised and segregated from a system of which he was part, and that he would be segregated and prosecuted by the system.

In order to preserve his liberty/integrity Snowden has to make sure that he is off-line from persecutors and prosecutors. At the same time he is an on-line paradigm of sovereignty. The Internet being a domain that transcends juridical borders: Herein lies an on-line/off-line dynamic…

It is also something of a love story. The protagonist, identified merely as The Writer and played by Daniel Radcliffe, is a proxy for the playwright who, in the wake of a painful break-up, is trying first to use the internet, then to wean himself off it, in order to make meaningful connections with others. Through his personal journey, Graham gets at the play’s real purpose: to animate the post-Snowden world in such a way as to make us, the audience, feel that not only are our intellectual but our emotional liberties at risk.

At the center of the play is an understanding most of us grasp at but have yet fully to articulate: that the more we share with strangers online, the less available our interior lives become not just to our intimate relations and friends, but to ourselves. The play opens in a psychotherapist’s office in north London, where The Writer is meeting his therapist for the first time to discuss his state of emotional paralysis. What is the introvert to do in an age in which the sharing economy – emotional, moral, financial, structural – is the only currency available?